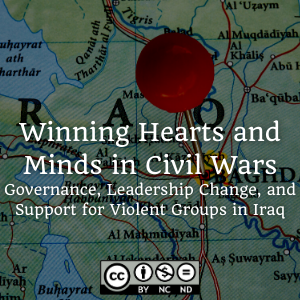 Abstract: The “hearts and minds” model of combating rebellions holds that civilians are less likely to support violent opposition groups if the government provides public services and security. Building on this model, we argue that a political event that raises popular expectations of future public service and security provision increases support for the government and decreases sympathy for violent opposition groups. To test this argument, we leverage a unique research design opportunity that stems from the unforeseen announcement of the resignation of Iraq’s divisive prime minister in August 2014 while an original survey was being administered across the country. We show that the leadership transition led Iraq’s displeased Sunni Arab minority to shift support from the violent opposition to the government. In line with our argument, this realignment was due to rising optimism among Sunni Arabs that the new government would provide services and public goods—specifically security, electricity, and jobs.