Home » » Who Punishes Extremist Nominees? Candidate Ideology and Turning Out the Base in US Elections 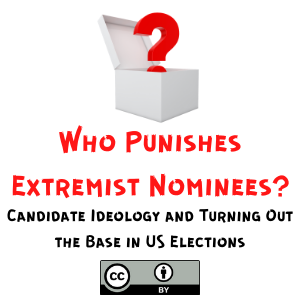 Abstract: Political observers, campaign experts, and academics alike argue bitterly over whether it is more important for a party to capture ideologically moderate swing voters or to encourage turnout among hardcore partisans. The behavioral literature in American politics suggests that voters are not informed enough, and are too partisan, to be swing voters, while the institutional literature suggests that moderate candidates tend to perform better. We speak to this debate by examining the link between the ideology of congressional candidates and the turnout of their parties’ bases in US House races, 2006–2014. Combining a regression discontinuity design in close primary races with survey and administrative data on individual voter turnout, we find that extremist nominees—as measured by the mix of campaign contributions they receive—suffer electorally, largely because they decrease their party’s share of turnout in the general election, skewing the electorate towards their opponent’s party. The results help show how the behavioral and institutional literatures can be connected. For our sample of elections, turnout appears to be the dominant force in determining election outcomes, but it advantages ideologically moderate candidates because extremists appear to activate the opposing party’s base more than their own.