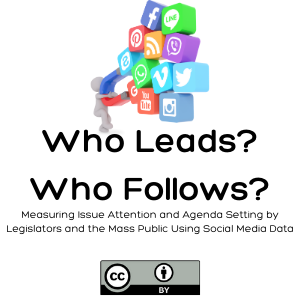 Abstract: Are legislators responsive to the priorities of the public? Research demonstrates a strong correspondence between the issues about which the public cares and the issues addressed by politicians, but conclusive evidence about who leads whom in setting the political agenda has yet to be uncovered. We answer this question with fine-grained temporal analyses of Twitter messages by legislators and the public during the 113th US Congress. After employing an unsupervised method that classifies tweets sent by legislators and citizens into topics, we use vector autoregression models to explore whose priorities more strongly predict the relationship between citizens and politicians. We find that legislators are more likely to follow, than to lead, discussion of public issues, results that hold even after controlling for the agenda-setting effects of the media. We also find, however, that legislators are more likely to be responsive to their supporters than to the general public.