Home » All Catalog » When the Whole Is Greater than the Sum of Its Parts: On the Conceptualization and Measurement of Populist Attitudes and Other Multidimensional Constructs 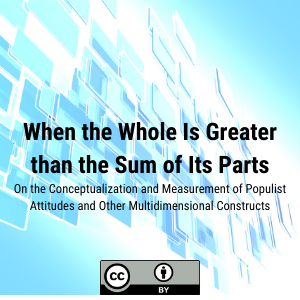 Abstract: Multidimensional concepts are non-compensatory when higher values on one component cannot offset lower values on another. Thinking of the components of a multidimensional phenomenon as non-compensatory rather than substitutable can have wide-ranging implications, both conceptually and empirically. To demonstrate this point, we focus on populist attitudes that feature prominently in contemporary debates about liberal democracy. Given similar established public opinion constructs, the conceptual value of populist attitudes hinges on its unique specification as an attitudinal syndrome, which is characterized by the concurrent presence of its non-compensatory concept subdimensions. Yet this concept attribute is rarely considered in existing empirical research. We propose operationalization strategies that seek to take the distinct properties of non-compensatory multidimensional concepts seriously. Evidence on five populism scales in 12 countries reveals the presence and consequences of measurement-concept inconsistencies. Importantly, in some cases, using conceptually sound operationalization strategies upsets previous findings on the substantive role of populist attitudes.

Review When the Whole Is Greater than the Sum of Its Parts: On the Conceptualization and Measurement of Populist Attitudes and Other Multidimensional Constructs. Cancel reply