Home » All Catalog » When Does Diffusing Protest Lead to Local Organization Building? Evidence from a Comparative Subnational Study of Russia’s “For Fair Elections” Movement 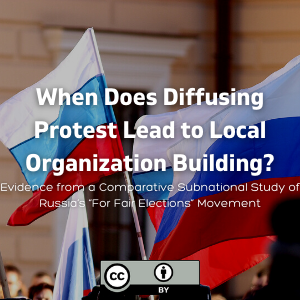 Abstract: Under what conditions do nation-wide mass protests in authoritarian regimes produce new local activist organizations? Based on sixty-five interviews and over 1,000 media reports, internal documents, and social media posts, I compare the organization-building process in the “For Fair Elections” (FFE) protests of 2011–2012 across four Russian regions. I argue that mass protests are more likely to leave behind new social movement organizations (SMOs) when the local and the national interact, i.e., when long-standing activists on the ground perceive an opportunity to use the protests for their ongoing local struggles. Where new SMOs are established, their composition, activity pattern, and inner structure follow the tactical and organizational repertoires of veteran activists that were shaped by their local political environments. This argument illuminates the functioning of electoral authoritarian regimes from a subnational perspective and identifies conditions under which a bottom-up challenge to an authoritarian political system can drive local civil society development.