Home » All Catalog » Wealth, Slaveownership, and Fighting for the Confederacy: An Empirical Study of the American Civil War 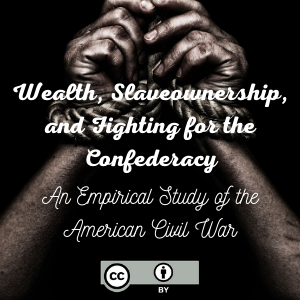 Abstract: How did personal wealth and slaveownership affect the likelihood Southerners fought for the Confederate Army in the American Civil War? On the one hand, wealthy Southerners had incentives to free-ride on poorer Southerners and avoid fighting; on the other hand, wealthy Southerners were disproportionately slaveowners, and thus had more at stake in the outcome of the war. We assemble a dataset on roughly 3.9 million free citizens in the Confederacy and show that slaveowners were more likely to fight than non-slaveowners. We then exploit a randomized land lottery held in 1832 in Georgia. Households of lottery winners owned more slaves in 1850 and were more likely to have sons who fought in the Confederate Army. We conclude that slaveownership, in contrast to some other kinds of wealth, compelled Southerners to fight despite free-rider incentives because it raised their stakes in the war’s outcome.

Review Wealth, Slaveownership, and Fighting for the Confederacy: An Empirical Study of the American Civil War. Cancel reply