Home » All Catalog » Universal Love or One True Religion? Experimental Evidence of the Ambivalent Effect of Religious Ideas on Altruism and Discrimination 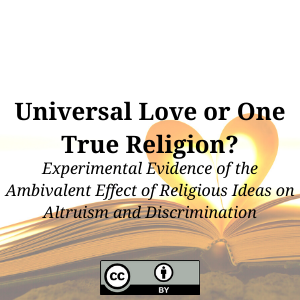 Abstract: Contrary to the expectations of secularization theory, religion remains socially important and affects politics in multiple ways—especially regarding conflict between religious communities. Theoretically, religion can increase altruism, but belief in the superiority of one’s faith may facilitate intergroup discrimination and related conflict. Previous findings remain inconclusive, however, as specific religious ideas have hardly been tested. In this article, we argue that the content of religious ideas has causal effects on intergroup discrimination. We hence test the impact of two opposing, prominent religious ideas on altruism and discrimination: universal love and the notion of one true religion. Conducting dictator games with Christians and Muslims in Ghana and Tanzania, we find causal effects: Whereas the idea of one true religion increases intergroup discrimination, that of universal love fosters equal treatment. The policy implications hereof are obvious—promoting tolerant religious ideas seems crucial to avoiding conflict.

Review Universal Love or One True Religion? Experimental Evidence of the Ambivalent Effect of Religious Ideas on Altruism and Discrimination. Cancel reply