Home » » (Under What Conditions) Do Politicians Reward Their Supporters? Evidence from Kenya’s Constituencies Development Fund 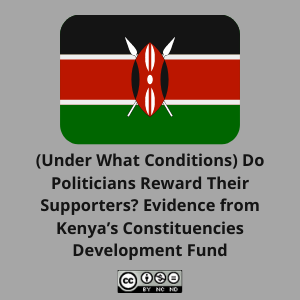 Abstract: We leverage innovative spatial modeling techniques and data on the precise geo-locations of more than 32,000 Constituency Development Fund (CDF) projects in Kenya to test whether Members of Parliament (MPs) reward their supporters. We find only weak evidence that MPs channel projects disproportionately to areas inhabited by their political allies, once we control for other factors that affect where projects are placed, such as population density, poverty rates, ethnic demographics, and distance to paved roads. Notwithstanding this result, we find evidence for cross-constituency variation in political targeting, driven in large part by the spatial segregation of the MP’s supporters and opponents. Our findings challenge the conventional wisdom about the centrality of clientelistic transfers in Africa and underscore how local conditions generate particular incentives and opportunities for the strategic allocation of political goods. We also highlight the benefits and challenges of analyzing allocations at the project level rather than aggregated to the administrative unit.