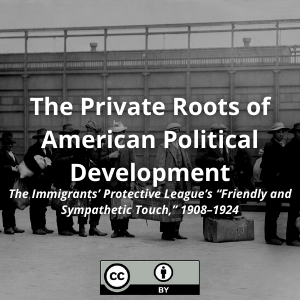 Abstract: This article aims to illuminate how non-state actors participate in forging public institutions and in establishing public agendas. It also sets out to identify novel mechanisms of state building. It does so by examining the historical experience of the Immigrants’ Protective League (IPL) from its founding in 1908 through 1924. The history of the IPL highlights the role of organized, networked women in generating new boundary stories and doing boundary work; in conducting research and enhancing legibility; in incubating new policy experiments; and in moving the national, state, and local governments to take up new tasks in the progressive era. Focusing on women’s activism in this period, and efforts to link immigrants to categories of the vulnerable, reveals that porous boundaries, hybrid power-sharing arrangements, and public-private collaborations may be more typical in forging new American institutions and public agendas than is generally recognized—and insufficiently captured by a narrative of a weak state borrowing temporary capacity from private actors.