Home » All Catalog » The Immanent Potential of Economic and Monetary Integration: A Critical Reading of the Eurozone Crisis 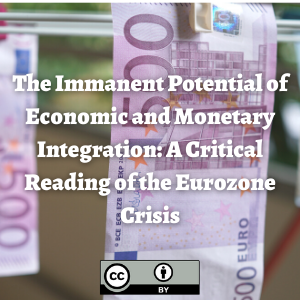 Abstract: The Eurozone crisis revealed fundamental flaws in the institutional architecture of the Economic and Monetary Union. Its lack of political steering capacity has demonstrated the need for a broad but seemingly unachievable political union with shared economic governance and a common treasury. Agreement on further measures has been difficult to achieve, as different actors have imposed divergent external criteria for the success of the Eurozone. As part of their heritage in Western Marxism, the critical theorists of the Frankfurt School sought to overcome such problems by identifying internal standards for social criticism. Building on their understanding of immanent critique, I argue that the Eurozone already contains the normative principles necessary to support greater political integration. While the citizens of Europe must provide the democratic legitimation necessary to realize this latent potential, the flaws revealed by the crisis are already pushing Europe towards greater transnational solidarity.

Review The Immanent Potential of Economic and Monetary Integration: A Critical Reading of the Eurozone Crisis. Cancel reply