Home » » The Fate of International Monetary Systems: How and Why They Fall Apart 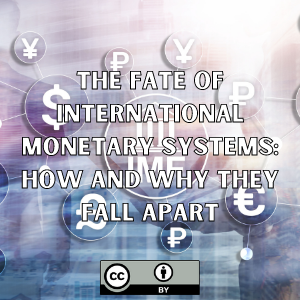 Abstract: The collapses of the interwar and Bretton Woods monetary regimes have been understood as evidence that international monetary regimes fail when sudden economic shocks destabilize the political coalitions or shared ideas underpinning them. But while these histories are important, other monetary regimes, such as the Sterling Area and Latin Union, disintegrated over long periods of time. If exogenous shocks do not account for varied patterns of destabilization, what does? Using the tools of comparative-historical analysis, I argue that these patterns are the result of strategic choices made by hegemonic powers, choices that are in turn governed by the historical-structural foundations of regimes. From these foundations emerge alternative leadership strategies and membership behaviors responsible for endogenous macro-institutional effects that drive the observed regime trajectories. Regime leaders may establish visibly unequal collective arrangements that maintain their positions but leave a system vulnerable to overt internal resistance and sudden breakdown. Or leaders may reject collective arrangements in order to secretly discriminate among members, slowly building dysfunction into a system, driving its gradual abandonment by members and institutional decline. The analysis both suggests that more equal state power may improve long-run regime performance, and also locates structural vulnerabilities in contemporary regimes.