Home » » Standing in Line When Queues Are on the Decline: Services Satisfaction Following the Swedish Health Care Waiting Time Guarantee 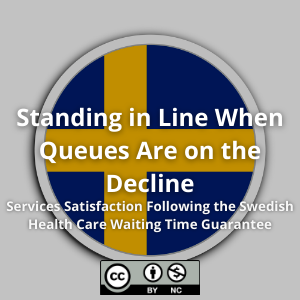 Abstract: Understanding mass public support for health systems and welfare polices is required in order to safeguard the legitimacy of democratic governance of the welfare state. If policies to meet dissatisfaction go unnoticed, the whole idea of responsive democracy is in vain. This paper focuses on the 2005 Swedish health care waiting-time guarantee, which resulted in drastically lower hospital waiting times in VÃ¤stra GÃ¶taland County. Exploring questions of significant theoretical relevance in the literature about policy feedback effects, the paper investigates if the decrease in waiting times affected hospital service satisfaction and if this effect was moderated by policy proximity and visibility. Data from the West Sweden SOM survey are utilized, measuring hospital service satisfaction from 2004 to 2009. To disentangle the role of policy proximity, two indicators are usedâ€”user status and subjective health status. Furthermore, policy visibility is measured by an individualâ€™s level of political interest. The results show that the decrease in waiting times resulted in a substantial increase in hospital service satisfaction. However, the increase was not more pronounced among groups with higher proximity and visibility. On the contrary, results indicate that the increase in hospital service satisfaction was stronger among those already in good health.