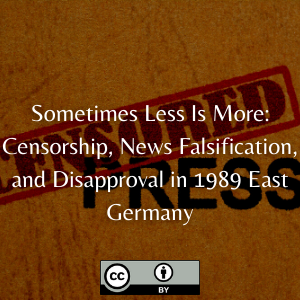 Abstract: Does more media censorship imply more regime stability? We argue that censorship may cause mass disapproval for censoring regimes. In particular, we expect that censorship backfires when citizens can falsify media content through alternative sources of information. We empirically test our theoretical argument in an autocratic regime—the German Democratic Republic (GDR). Results demonstrate how exposed state censorship on the country’s emigration crisis fueled outrage in the weeks before the 1989 revolution. Combining original weekly approval surveys on GDR state television and daily content data of West German news programs with a quasi‐experimental research design, we show that recipients disapproved of censorship if they were able to detect misinformation through conflicting reports on Western television. Our findings have important implications for the study of censoring systems in contemporary autocracies, external democracy promotion, and campaigns aimed at undermining trust in traditional journalism.