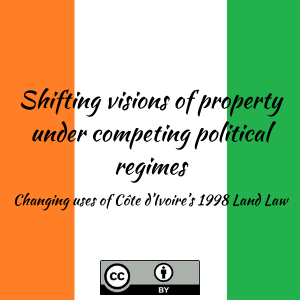 Abstract: Land law reform through registration and titling is often viewed as a technocratic, good-governance step toward building market economies and depoliticising land transactions. In actual practice, however, land registration and titling programmes can be highly partisan, bitterly contentious, and carried forward by political logics that diverge strongly from the market-enhancing vision. This paper uses evidence from Côte d’Ivoire to support and develop this claim. In Côte d’Ivoire after 1990, multiple, opposing political logics drove land law reform as it was pursued by successive governments representing rival coalitions of the national electorate. Between the mid-1990s and 2016, different logics – alternatively privileging user rights, the ethnic land rights of autochthones, and finally a state-building logic – prevailed in succession as national government crafted and then sought to implement the new 1998 land law. The case underscores the extent to which deeply political questions are implicated in land registration and titling policies.