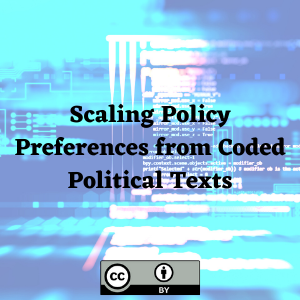 Abstract: Scholars estimating policy positions from political texts typically code words or sentences and then build left-right policy scales based on the relative frequencies of text units coded into different categories. Here we reexamine such scales and propose a theoretically and linguistically superior alternative based on the logarithm of odds-ratios. We contrast this scale with the current approach of the Comparative Manifesto Project (CMP), showing that our proposed logit scale avoids widely acknowledged flaws in previous approaches. We validate the new scale using independent expert surveys. Using existing CMP data, we show how to estimate more distinct policy dimensions, for more years, than has been possible before, and make this dataset publicly available. Finally, we draw some conclusions about the future design of coding schemes for political texts.