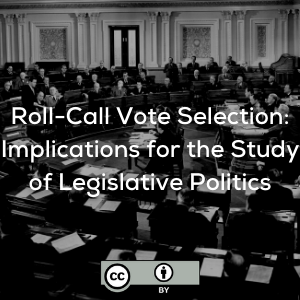 Abstract: Roll-call votes provide scholars with the opportunity to measure many quantities of interest. However, the usefulness of the roll-call sample depends on the population it is intended to represent. After laying out why understanding the sample properties of the roll-call record is important, we catalogue voting procedures for 145 legislative chambers, finding that roll calls are typically discretionary. We then consider two arguments for discounting the potential problem: (a) roll calls are ubiquitous, especially where the threshold for invoking them is low or (b) the strategic incentives behind requests are sufficiently benign so as to generate representative samples. We address the first defense with novel empirical evidence regarding roll-call prevalence and the second with an original formal model of the position-taking argument for roll-call vote requests. Both our empirical and theoretical results confirm that inattention to vote method selection should broadly be considered an issue for the study of legislative behavior.