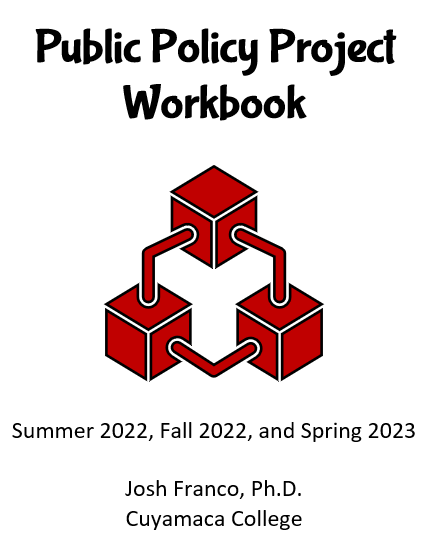 Inspiring publicly spirited and scholarly minded students means utilizing our knowledge of political ideals, institutions, and behaviors, and exploring the lifecycle of public policies – their formation, effectuation, and reformation – in the context of a diversifying society and economy.

The Public Policy Project Workbook serves as a keystone of the Political Science program at my college, Cuyamaca Community College, because it introduces students to the formation of public policy through the lens of four analyst roles: Data, Geographic Information Systems, Policy, and Communications.

Genesis of this Workbook

As early as senior year in high school, I became interested in public policy. Reflecting, what motivated my interest was a combination of my student government experiences, watching Meet the Press or Face the Nation on Sundays before church, and the idea that public policy was a way to make change.

As a student at Cerritos Community College from 2003-2005, I would walk through the library stacks and check out public policy books. In deciding which university to apply for transfer, I asked “What campus has a degree in public policy?” At the time, the only University of California campus to offer a public policy degree was UC Merced. So, that is the only campus I applied to. The long name of my undergraduate degree was Bachelor of Arts in Social, Behavioral, Cognitive Sciences with an emphasis in Public Policy.

After I graduated from UC Merced, I entered the UC Center Sacramento program in June 2007. I had already secured an internship in the Office of the Lieutenant Governor John Garamendi Sr.  thanks to John Garamendi Jr. who, after a 40-minute conversation in April 2007, said “Call this phone number; you are going to go work for my dad.”

For the next five years, I dedicated myself to the practice of public policy.