Home » All Catalog » Polimetrics: A Companion to Introduction to Political Science Research Methods 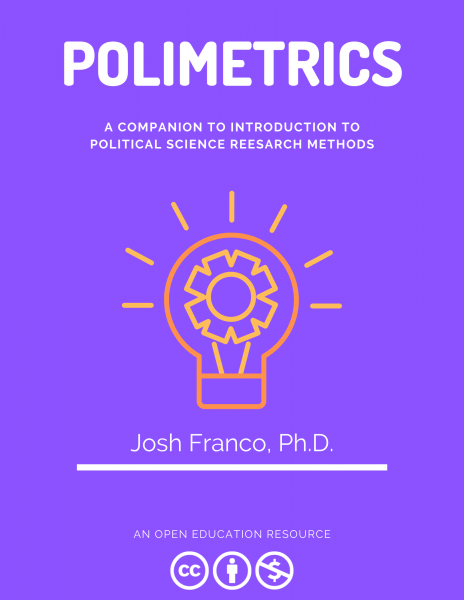 When I was a first-generation student at community college, I never heard of STATA or any other statistical and data analysis software. I had a challenging enough time in my computer programming, statistics, and calculus courses during my first two years, that having a professor try to teach me about such data analysis software would likely have gone in one ear and out the other ear.

Once I transferred to UC Merced, I was introduced to STATA in my econometrics (think economics and statistics) course. I earned a D+ in that course because I was confused by the underlying mechanics of the best, linear, unbiased estimate (good old “BLUE”) and having to use STATA. Also, I spent time organizing California Students for Barack Obama during spring 2007, so my attendance in econometrics was not consistent.

I ended up successfully retaking econometrics at Sacramento State after my employer, Lieutenant Governor John Garamendi, told me that I needed to finish my bachelor’s degree. I did not mention this in the prior paragraph, but that D+ needed to be a C- so the course would count towards my graduation requirements. While it cost me about $500 to retake the course, I was able to leave work early on Tuesdays and Thursdays so I could drive from downtown to the university campus.

Once I started working in the U.S. House of Representatives, I encountered more reports with data analysis. A practical link was established after I met with representatives of the RAND Corporation to learn more about reports they published. That is when I realized the utility of my econometrics training and the real-world of public policy.

I left my real-world career as a congressional policy advisor and returned to UC Merced to start the political science Ph.D. program. Data analysis returned and I struggled mightily enough that I had to retake the 3-course core methods sequence my second year in the program. I powered through and successfully completed the quantitative analysis-rich program. I resolved that when I became a professor, I would work to introduce my mostly first-generation community college students to statistical and data analysis software. And so, Polimetrics is a result of that resolve.