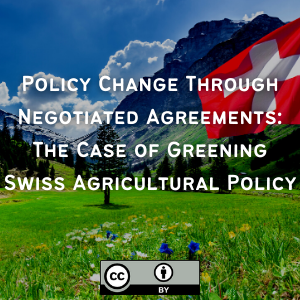 Abstract: Negotiated agreements are a promising pathway for policy change. This paper revisits and extends characteristics of negotiated agreements using the Advocacy Coalition Framework. We focus on two characteristics of negotiated agreements that previous literature has not explicitly addressed. First, we scrutinize the role of policy core and secondary policy beliefs in actor constellations. Secondly, we address partial success, that is, the notion that actors concede on some points, but in return succeed in others. We investigate these two characteristics in the 2014 reform of Swiss agricultural policy. Based on cluster and social network analysis, we exemplify how negotiated agreements embedded in a participatory policy process lead to a surprising level of policy change by promoting agricultural production practices with an intended positive effect on the environment. We show that rather than coalitions based on policy core beliefs, the formation of groups of actors based on secondary beliefs who span across the coalitions formed the basis for a negotiated agreement. Green and conservative groups were both able to achieve partial success. We conclude that insights from this exemplary case study should revive the concept and initialize a research agenda on negotiated agreements as a pathway for change in domestic policymaking.