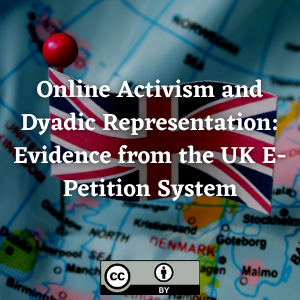 Abstract: By making it easier for citizens to communicate their preferences, online forms of political participation have the potential to strengthen the representational link between politicians and voters. However, we know little about the effects of online advocacy on politiciansâ€™ behavior. Using new data from an e-petition system in the United Kingdom, I show that support for a petition among a Member of Parliamentâ€™s constituents is associated with a substantial increase in the probability that the MP advocates for the petition in parliamentary debate, even when compared to MP behavior in counterfactual non-petition debates which focus on the same policy issues. However, MP responsiveness is conditioned both by party discipline and electoral competition. These findings have important implications for our understanding of dyadic representation in parliamentary systems.