Home » All Catalog » Military, Authoritarianism and Islam: A Comparative Analysis of Bangladesh and Pakistan 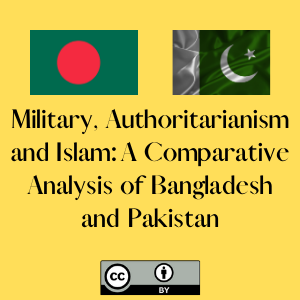 Abstract: The years 1975 and 1977 witnessed a wave of de facto military regimes in Bangladesh and Pakistan, respectively. In Pakistan, General Muhammad Zia-ul-Haq operationalized the country’s preexisting Islamic identity from emblematic to substantive at both domestic and international levels. General Ziaur Rahman and General Ershad of Bangladesh revived the country’s Islamic identity at the domestic and international levels and reopened the space for religious fractions that were banned from politics constitutionally in the previous regime. Focusing on military regimes in Bangladesh and Pakistan between 1975 and 1990, this paper aims to bridge that gap by specifically examining the use of Islam. This study argues that dictators in both countries used Islam to support their survival strategies of legitimacy, repression, and social control. Authoritarian rulers did not have to use Islam to maintain military coherence, because of the military’s culture of subordination to superiors.