Home » All Catalog » Is Door-to-Door Canvassing Effective in Europe? Evidence from a Meta-Study across Six European Countries 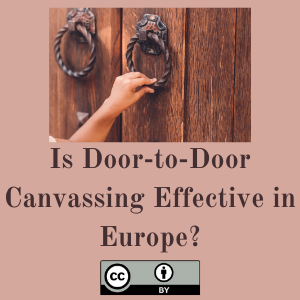 Abstract: A vast amount of experimental evidence suggests that get-out-the-vote encouragements delivered through door-to-door canvassing have large effects on turnout. Most of the existing studies have been conducted in the United States, and are inspiring European mobilization campaigns. This article explores the empirical question of whether the American findings are applicable to Europe. It combines existing European studies and presents two new Danish studies to show that the pooled point estimate of the effect is substantially smaller in Europe than in the United States, and finds no effects in the two Danish experiments. The article discusses why the effects seem to be different in Europe compared to the United States, and stresses the need for further experiments in Europe as there is still considerable uncertainty regarding the European effects. While one possible explanation is that differences in turnout rates explain the differences in effect sizes, the empirical analysis finds no strong relationship between turnout and effect sizes in either Europe or the United States.