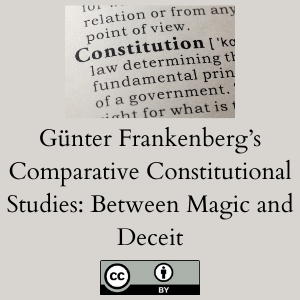 Abstract: Constitutions traffic in magic and deceit, argues Günter Frankenberg, promising freedom and democracy even as they underwrite the exercise of coercive power on a massive scale. Scholars should approach constitutions with a healthy skepticism, but, Frankenberg contends, most mainstream scholars are too credulous, especially regarding the claims of liberal constitutionalism. Comparative Constitutional Studies serves as his corrective to the perceived blind spots and predilections of mainstream comparative constitutional scholarship, and it gives attention to little-known constitutions, forgotten histories, and alternatives to liberal constitutionalism. It’s a rich, challenging, and valuable book, one that takes the reader to some off-the-beaten-track places and offers some new perspectives on well-studied landmarks. It does not, however, represent such a radical break from mainstream scholarship as the author supposes, both because the book’s own analysis, in practice, is not deeply unconventional, and because mainstream scholarship is more diverse than Frankenberg gives it credit for.