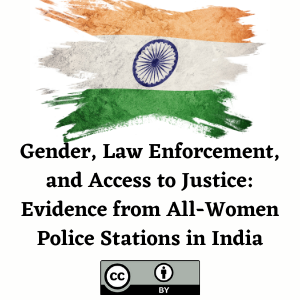 Abstract: Can gender-based “enclaves” facilitate women’s access to justice? I examine all-female police stations in India and test whether group-specific institutions assist victims of gender-based violence and female officers in law enforcement. I create an original dataset based on Indian police reports and leverage the manner in which all-women police stations were opened in Haryana state to estimate their causal effect. The creation of enclaves in law enforcement does not increase registered crime. In fact, the intervention lowers the caseload at standard stations by justifying the deflection of gendered crimes, reduces responsibilities for policewomen, and increases travel cost for victims seeking redress. The institutions formalize the “counseling” of victims by encouraging reconciliation with abusers at the expense of arrest of suspects, and survey evidence suggests that all-women stations might not be associated with positive perceptions of policewomen. Broadly, I argue that representation as separation may have unintended consequences.