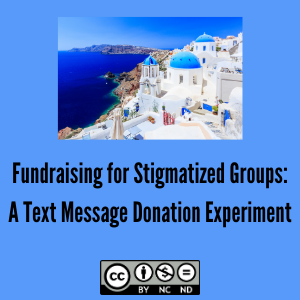 Abstract: As government welfare programming contracts and NGOs increasingly assume core aid functions, they must address a long-standing challenge—that people in need often belong to stigmatized groups. To study other-regarding behavior, we fielded an experiment through a text-to-give campaign in Greece. Donations did not increase with an appeal to the in-group (Greek child) relative to a control (child), but they were halved with reference to a stigmatized out-group (Roma child). An appeal to fundamental rights, a common advocacy strategy, did not reduce the generosity gap. Donations to all groups were lower near Roma communities and declined disproportionately for the Roma appeal. Qualitative research in 12 communities complements our experiment. We conclude that NGO fundraising strategies that narrowly emphasize either in-groups or out-groups, or fundamental rights language, may not be as effective as broader appeals, and we discuss implications for public goods provision in an era of growing nationalism.