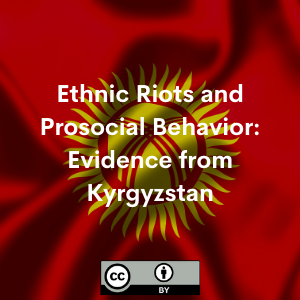 Abstract: Do ethnic riots affect prosocial behavior? A common view among scholars of ethnic violence is that riots increase cooperation within the warring groups, while cooperation across groups is reduced. We revisit this hypothesis by studying the aftermath of the 2010 Osh riot in Kyrgyzstan, which saw Kyrgyz from outside the city kill over 400 Uzbeks. We implement a representative survey, which includes unobtrusive experimental measures of prosocial behavior. Our causal identification strategy exploits variation in the distance of neighborhoods to armored military vehicles, which were instrumental in orchestrating the riot. We find that victimized neighborhoods show substantially lower levels of prosocial behavior. Importantly, we demonstrate that the reduction is similarly stark both within and across groups. Using qualitative interviews, we parse out two mechanisms that help explain the surprising reduction in ingroup prosociality: Victimized Uzbeks felt abandoned by their coethnics, and variation in victimization created a feeling of suspicion.