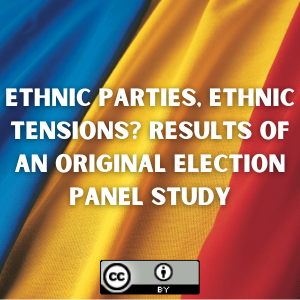 Abstract: Ethnic diversity is considered detrimental to national unity, especially if ethnicity is politically mobilized: Ethnic parties in electoral competition in particular are thought to increase the salience of ethnic differences and, with it, ethnic tensions. Yet the individual links of this psychological chain have only been examined cross‐sectionally, and never together. This article employs original longitudinal survey data to simultaneously assess changes in ingroup identification, outgroup aversion, and national identification over the election period within one diverse society: Romania. While ingroup identification does increase, ethnic relations do not worsen. On the contrary, outgroup aversion decreases while national identification increases, for minority and majority Romanian citizens alike. I explain these findings with the common ingroup identity model from social psychology: Elections in ethnically diverse societies may not only increase the salience of ethnic groups but also that of the superordinate, national identity. The findings question the often assumed automaticity of intergroup threat.