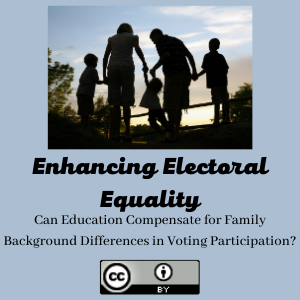 Abstract: It is well documented that voter turnout is lower among persons who grow up in families from a low socioeconomic status compared with persons from high-status families. This paper examines whether reforms in education can help reduce this gap. We establish causality by exploiting a pilot scheme preceding a large reform of Swedish upper secondary education in the early 1990s, which gave rise to exogenous variation in educational attainment between individuals living in different municipalities or born in different years. Similar to recent studies employing credible identification strategies, we fail to find a statistically significant average effect of education on political participation. We move past previous studies, however, and show that the reform nevertheless contributed to narrowing the voting gap between individuals of different social backgrounds by raising turnout among those from low socioeconomic status households. The results thus square well with other recent studies arguing that education is particularly important for uplifting politically marginalized groups.