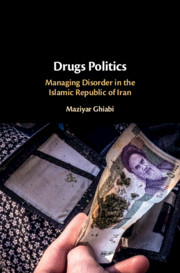 Abstract: Iran has one of the world’s highest rates of drug addiction: estimated to be between 2 and 7 percent of the entire population. This makes the questions that this book asks all the more salient: what is the place of illegal substances in the politics of modern Iran? How have drugs affected the formation of the Iranian state and its power dynamics? And how have governmental attempts at controlling and regulating illicit drugs affected drug consumption and addiction? By answering these questions, Maziyar Ghiabi suggests that the Islamic Republic of Iran’s image as an inherently conservative state is not only misplaced and inaccurate, but in part a myth. In order to dispel this myth, he skilfully combines ethnographic narratives from drug users, vivid field observations from ‘under the bridge’, with archival material from the pre- and post-revolutionary era, statistics on drug arrests and interviews with public officials. This title is also available as Open Access on Cambridge Core.