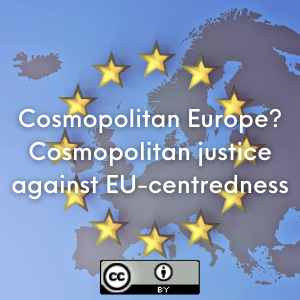 Abstract: Since the early 2000s, the concept of ‘cosmopolitan Europe’ (CE) has become popular among philosophers and sociologists as a ‘post-nationalist’ way to rethink and reform the European Union (EU) in an age of globalization. Thus, seeking its justification in the European cosmopolitan tradition as an answer to unrestrained nationalism in Europe, CE should make the EU pursue a vigorously cosmopolitan understanding of Europe as well as the world. The present article defends the claim that prevailing, EU-centred CE is morally flawed for uncritically presupposing the fundamental acceptability of the EU as a project that actually clashes with cosmopolitan justice. A threefold argument is developed. First, morally, cosmopolitanism is to be understood as a particularism-critical position that emphasizes global distributive justice. Second, from this moral cosmopolitan perspective, the EU is unjust for epitomizing ‘enlarged particularism’. Third, views of CE are unduly conservative for neglecting – neither acknowledging nor refuting – cosmopolitan justice while taking the EU’s basic defensibility as self-evident. The conclusion suggests that CE could only be a utopian, bottom-up view that advocates EU de-integration in favour of Europe-wide cooperation for a world more just in a cosmopolitan sense.