Home » » Coalition Prospects and Policy Change: An Application to the Environment 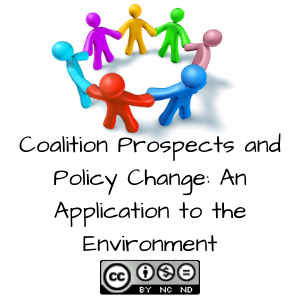 Abstract: In most developed democracies, parties adjust their positions to polls and public opinion. Yet, in a coalition government, the policy that emerges is often the outcome of negotiations between governing parties. We argue that the credibility of exit threats by current coalition members and the importance of outside parties for the formation of potential alternative coalitions both matter for policy adoption. Building on a new data set measuring the expected coalition-inclusion probabilities of parties in parliamentary democracies, we estimate the effect of coalition prospects on an important policy outcomeâ€”environmental policy stringencyâ€”in nine European countries between 1990 and 2012. Our findings demonstrate that only polling shifts that alter coalition probabilities affect outcomes. Changes in the coalition-inclusion probability of green partiesâ€”regardless of whether they are in governmentâ€”predict changes in the environmental policy stringency of sitting governments. Political polls, in contrast, do not.