Home » All Catalog » Buying Amendments? Lobbyists’ Campaign Contributions and Microlegislation in the Creation of the Affordable Care Act 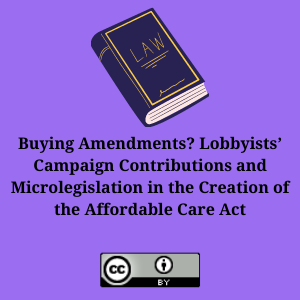 Abstract: When do campaign contributions matter? This article advances the claim that a group that gives campaign contributions to US Members of Congress is more likely to achieve legislative success when (1) a single legislator can deliver to the group (2) a private benefit (3) without attracting negative attention. Using an original data set based on the written comments of nearly 900 interest groups lobbying the US Senate Finance Committee on health reform legislation in 2009, I link group requests to corresponding legislation. The analysis shows a significant relationship between lobby groups’ campaign contributions and their legislative success, and at distinct units of analysisâ€”the group, the side, and the group-senator dyad. The relationship is particularly strong in predicting senatorsâ€™ amendments in committee. The rare data presented here offer compelling evidence that interest groups’ legislative victories are sometimes connected to campaign contributions in a way that previous studies could not identify.