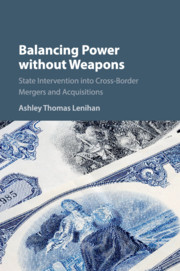 Description: Why do states block some foreign direct investment on national security grounds even when it originates from within their own security community? Government intervention into foreign takeovers of domestic companies is on the rise, and many observers find it surprising that states engage in such behaviour not only against their strategic and military competitors, but also against their closest allies. Ashley Lenihan argues that such puzzling behaviour can be explained by recognizing that states use intervention into cross-border mergers and acquisitions as a tool of statecraft to internally balance the economic and military power of other states through non-military means. This book tests this theory using quantitative and qualitative analysis of transactions in the United States, Russia, China, and fifteen European Union states. It deepens our understanding of why states intervene in foreign takeovers, the relationship between interdependence and conflict, the limits of globalization, and how states are balancing power in new ways. This title is also available as Open Access.