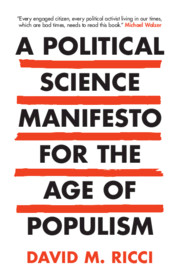 Description: Populism and authoritarian-populist parties have surged in the 21st century. In the United States, Donald Trump appears to have become the poster president for the surge. David M. Ricci, in this call to arms, thinks Trump is symptomatic of the changes that have caused a crisis among Americans – namely, mass economic and creative destruction: automation, outsourcing, deindustrialization, globalization, privatization, financialization, digitalization, and the rise of temporary jobs – all breeding resentment. Rather than dwelling on symptoms, Ricci focuses on the root of our nation’s problems. Thus, creative destruction, aiming at perpetual economic growth, encouraged by neoliberalism, creates the economic inequality that fuels resentment and leads to increased populism. Ricci urges political scientists to highlight this destruction meaningfully and substantively, to use empirical realism to put human beings back into politics. Ricci’s sensible argument conveys a sense of political urgency, grappling with real-world problems and working to transform abstract speculations into tangible, useful tools. The result is a passionate book, important not only to political scientists, but to anyone who cares about public life. This title is also available as Open Access on Cambridge Core.