Home » All Catalog » A Formal Theory of Democratic Deliberation 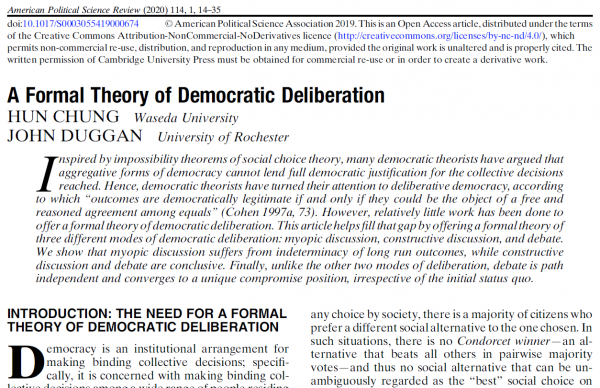 Abstract: Inspired by impossibility theorems of social choice theory, many democratic theorists have argued that aggregative forms of democracy cannot lend full democratic justification for the collective decisions reached. Hence, democratic theorists have turned their attention to deliberative democracy, according to which “outcomes are democratically legitimate if and only if they could be the object of a free and reasoned agreement among equals” (Cohen 1997a, 73). However, relatively little work has been done to offer a formal theory of democratic deliberation. This article helps fill that gap by offering a formal theory of three different modes of democratic deliberation: myopic discussion, constructive discussion, and debate. We show that myopic discussion suffers from indeterminacy of long run outcomes, while constructive discussion and debate are conclusive. Finally, unlike the other two modes of deliberation, debate is path independent and converges to a unique compromise position, irrespective of the initial status quo.